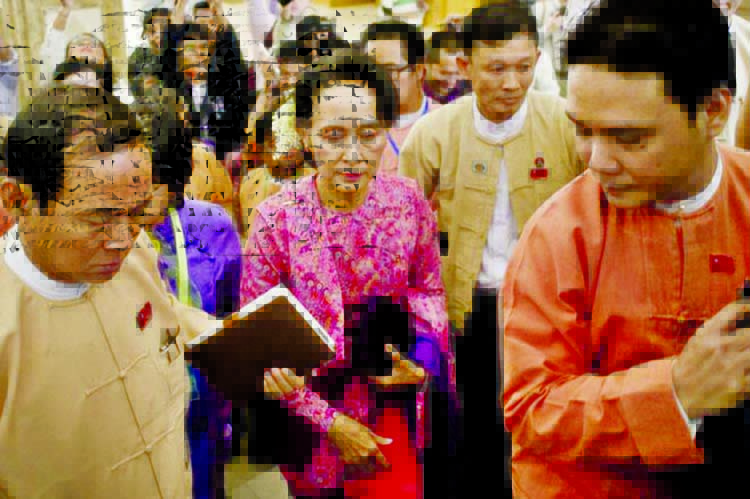 The first freely elected parliament in Myanmar for 50 years has held its opening session. Hundreds of new MPs, mostly from the National League for Democracy (NLD) but also some smaller parties, have been sworn and taken their seats.
The NLD, led by Aung San Suu Kyi, won 80% of contested seats in November's historic election.
But a quarter of all seats are reserved for the military, which also retains control of key ministries.
One of the new parliament's first jobs will be to choose a new president when outgoing leader Thein Sein steps down at the end of March.
Ms Suu Kyi, who spent 15 years under house arrest under the former military government, cannot take the top job. A clause in the constitution which was widely seen as specifically targeting her says anyone whose children are foreign cannot be president. Her sons are British not Burmese.
She has been very clear, however, that she intends to run Myanmar anyway, saying she would be "above the president". Ms Suu Kyi, who has not named a possible candidate, did not speak to reporters as she entered the building.
But NLD MP Nyein Thit told the AFP news agency: "We will work to get human rights and democracy as well as peace."
Another NLD MP, Khin Maung Myint, told Associated Press: "I never imagined that our party would be able to form the government. Even the public didn't think we could have an NLD government. But now it is like a shock to us and to the world too."
Lama Naw Aung, an MP for the minority Kachin State Democracy Party, said a seat in parliament was "a good opportunity for us to speak out for the ethnic people and demand indigenous rights", AP reports.
For most of the last 20 years Aung San Suu Kyi's NLD has been treated as the enemy here, its activities suppressed and its leaders jailed. Now hundreds of them are being sworn in as MPs. Even when the 25% of army-appointed representatives are included the NLD still have a majority. The identity of the country's next president is still a closely guarded secret. For it to be Ms Suu Kyi there would have to be an incredible last-minute deal and constitutional change. Most likely it will be one of her most trusted confidantes, possibly her doctor. The parliament in the capital, Nay Pyi Taw, began its session by electing NLD stalwart U Win Myint as Speaker of the lower house, as expected.
U Ti Khun Myat of the military-backed Union Solidarity and Development Party was voted in as his deputy.
The transition from military-only rule will go on until the NLD government officially starts its term in April. The army overthrew the last democratically elected parliament in 1962.