Police arrest two over murder of 4 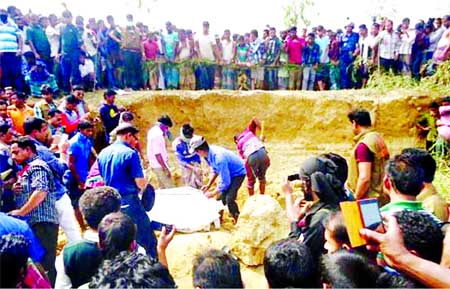 Police recovering the body of four missing kids from a sand field at Bahubol in Habiganj on Wednesday.

Police have arrested two men suspecting their involvement in the murder of four children in Habiganj's Bahubal Upazila.Abdul Ali and 'Jewel', of Sundrateki, were nabbed on Wednesday evening, Bahubal police OC Mosharraf Hossain said.The bodies of the four boys, buried under heaps of soil, were dug up earlier in the morning at a desiccated swamp in the village. They had gone missing on Friday.The boys have been identified as Monir Mia, 7, Zakaria Ahmed Shubho, 8, Tajel Mia, 10, and Ismail Hossain, 10.Monir, Shubho and Tajel are cousins who went to Sundrateki Primary School. Ismail, their neighbour, studied at Sundrateki Madrasa.Shubho's father filed a general diary with Bahubal police on Saturday after an unsuccessful search for the boys.Families of the four children have alleged that a dispute over felling of trees has led to the killings.Monir's father Abdal Mia told bdnews24.com they had clashed with Abdul Hai and his people of the same village a few months ago following a quarrel over the cutting of the trees.He alleged Hai and his men may have murdered the children to even the score.After the bodies were found in the morning, Habiganj disctrict Superintendent of Police Joydev Kumar Bhadra had said the children were probably buried in that spot after being murdered at a different location."It looks like it could have been the work of the rivals. We'll learn more from speaking to their families," he had added.The bodies were handed over to their families in the evening, said the Bahubal police OC.Habiganj Modern Sadar Hospital's physician Dr Debashish Das told bdnews24.com all of them had been strangled to death. Also, there were wounds on different parts of their bodies.Sylhet Police DIG Mizanur Rahman, while visiting the scene in the morning, had announced a Tk 100,000 reward for anyone who finds the killers.