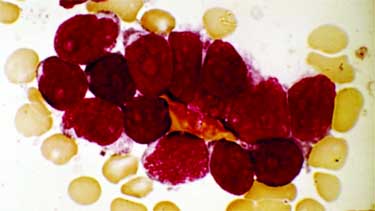 A therapy that retrains the body's immune system to fight cancer has provoked excitement after more than 90% of terminally ill patients reportedly went into remission.
White blood cells were taken from patients with leukaemia, modified in the lab and then put back.
But the data has not been published or reviewed and two patients are said to have died from an extreme immune response.
Experts said the trial was exciting, but still only "a baby step."
The news bubbled out of the American Association for the Advancement of Science'sÂ Â Â Â Â  annual meeting in Washington DC.
The lead scientist, Prof Stanley Riddell from the Fred Hutchinson Cancer Research Centre in Seattle, said all other treatments had failed in these patients and they had only two-to-five months to live.
He told the conference that: "The early data is unprecedented."
In the trial, cells from the immune system called killer t-cells were taken out of dozens of patients. The cells normally act like bombs destroying infected tissue.
The researchers genetically modified the t-cells to engineer a new targeting mechanism - with the technical name of chimeric antigen receptors - to target acute lymphoblastic leukaemia.
Prof Riddell told the BBC: "Essentially what this process does is, it genetically reprograms the T-cell to seek out and recognise and destroy the patient's tumour cells.
"[The patients] were really at the end of the line in terms of treatment options and yet a single dose of this therapy put more than ninety percent of these patients in complete remission where we can't detect any of these leukaemia cells."
But one cancer expert told me they still felt in the dark on the full significance of the study, as the data is not available.
Also seven of the patients developed cytokine release syndrome so severe that they required intensive care, and a further two patients died.
While those odds may be acceptable if facing terminal cancer, the side-effects are much greater than conventional leukaemia treatments such as chemotherapy and radiotherapy, which work in the majority of patients.