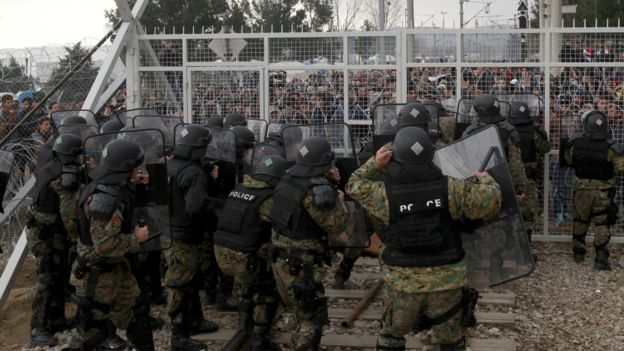 Macedonian police confronted hundreds of angry migrants at the fence

BBC Online: A crowd of migrants has broken down a barbed-wire fence on the Macedonia-Greece border using a steel pole as a battering ram.

TV footage showed migrants pushing against the fence at Idomeni, ripping away barbed wire, as Macedonian police let off tear gas to force them away.

A section of fence was smashed open with a metal signpost. It is not clear whether any migrants got through.

Many of those trying to reach northern Europe are Syrian and Iraqi refugees.

About 7,000 people are stuck on the Greek side of the border, as Macedonia is letting very few in. Many have been camping in squalid conditions for a week or more, with little food or medical help.

The chaos on Monday erupted as hundreds of people pushed their way past Greek police to reach the gate used to let trains through at the border crossing.

The protesters shouted "Open the border!" and threw stones at Macedonian riot police, while one group rammed the gate with the metal sign. Police responded by firing rounds of tear gas to force them back, before reinforcing the barrier.

Macedonia and some other Balkan countries have erected fences in an attempt to reduce the influx of migrants, after more than a million reached Germany last year.

Greece is angry with Austria for having imposed a cap on migrant numbers. The crisis has left Greece shouldering much of the burden of housing migrants arriving in the EU from Turkey.

Many are refugees fleeing war in the Middle East, while others are escaping human rights abuses in Afghanistan, Eritrea and other conflict zones.

In a TV interview she said: "Do you seriously believe that all the euro states that last year fought all the way to keep Greece in the eurozone, and we were the strictest, can one year later allow Greece to, in a way, plunge into chaos?"

She defended her decision last year to allow migrants in without a cap on numbers, saying she had no "Plan B".

She has insisted that Germany can cope with the influx - and has a humanitarian duty to look after war refugees.

But her stance has been strongly criticised by some EU neighbours and some politicians in her ruling conservative CDU-CSU bloc.

Greece, under intense pressure from anxious EU partners, has erected extra reception centres on the Greek islands near Turkey, where thousands of migrants have been arriving daily.

Austria and Hungary have adopted a tougher stance than Germany. Hungary has fenced off its southern border and refuses to take in any non-EU migrants.

Bomb kills at least 30 near girlsâ school in Afghan capital

Chinese rocket expected to crash into Earth this weekend