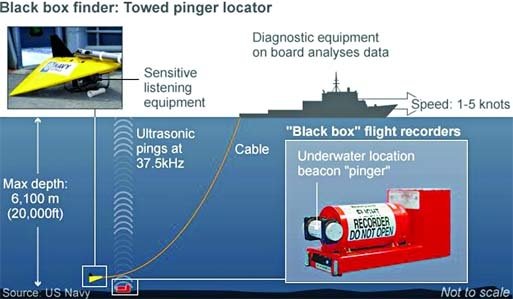 A Chinese ship searching for the missing Malaysia Airlines plane in the southern Indian Ocean has picked up a pulse signal, Chinese media say.They say the signal has a frequency of 37.5kHz per second - the same as those emitted by the flight recorders.However there is no evidence so far that it is linked to MH370.Dozens of ships and planes have joined the search, with the operation moving into its most intensive phase before batteries on the data recorders fade.On Saturday the Haixun 01 - one of two Chinese ships in the area - picked up the signal at about 25 degrees south latitude and 101 degrees east longitude, the state-run Xinhua news agency said."It is yet to be established whether it is related to the missing jet," it cautioned. China's Liberation Daily reported that three people on board had heard the signals, which were not recorded as they came suddenly. The flight is believed to have crashed in the southern Indian Ocean, although no confirmed debris has been found.It is still not known why the plane diverted from its planned flight path from Kuala Lumpur to Beijing four weeks ago with 239 people on board. Two of the ships searching an area of about 217,000 sq km (84,000 sq miles) have underwater locator capabilities.Australian naval vessel Ocean Shield is using a "towed pinger locator" from the US Navy, while HMS Echo, which had similar capabilities, was also searching.They are trying to detect an underwater signal emitted by the data recorders. But on Friday Australia's search chief Angus Houston said it was a race against time as the battery-powered signal fades after 30 days.The search is being co-ordinated by the Australian government's Joint Agency Co-ordination Centre (JACC) from Perth in Western Australia.Ships sighted a number of objects in the area on Friday but none were associated with the missing plane, the co-ordination agency said. ACM Houston said that the area - about 1,700km (1,000 miles) north-west of Perth - had been picked on the basis of analysis of the satellite data.On Saturday, Malaysia announced it had set up three ministerial committees to help co-ordinate the search, and a new investigation team which would include members from Australia, China, the US, the UK and France.