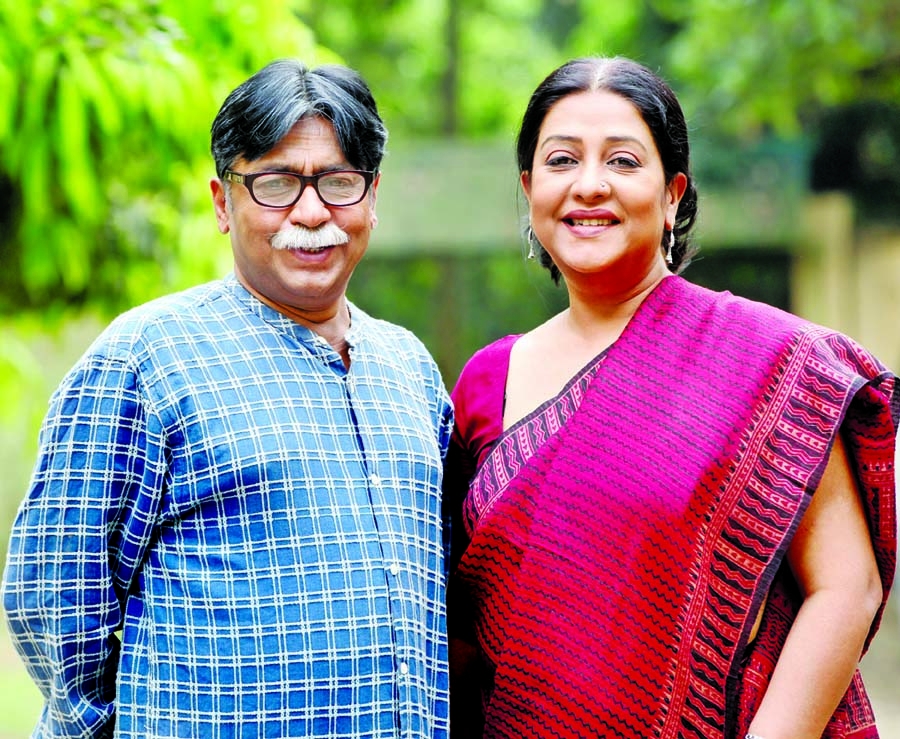 Popular TV actress Suborna Mustafa and popular actor and director Shahiduzzaman Selim performed together as pair in a new TV play titled Aji Bijon Ghor-e.
The play was directed by Rahmatullah Tuhin under the story written by Shahid Rahman. Suborna and Selim performed in role of husband-wife in the play Aji Bijon Ghore. Script of the play was written by Rupantor.
With the commitment to motherland painter Abir (Selim) settled himself in the country. On the other hand, his wife Ruba (Suborna) settled herself outside the country for the betterment of her career. But they didnât have formal separation between them.
Once Rini (Sanjida Preety) was brought up by Abir as like his daughter but Ruba didnât take it simply. At one stage, Abir died. After knowing this, Ruba returned to country. Conflict between Ruba and Rini began and story of the play got climax.
While talking about the play actor Shahiduzzaman Selim told this correspondent, âOne Suborna Mustafa is as like a mentor to me. I have learnt many things from her on stage, which couldnât be mentionable in one word. Working with her always makes me emotional. To work in this play, I have gathered something new experiences. It became a nice work. I think viewers will enjoy the play.â
Suborna Mustafa shared her feelings by this way, âEarlier I got Rahmatullah Tuhin as an assistant director in several plays. For the first time, I have worked under his lead direction. He is very cooperative and works in organised way. I have enjoyed working in the play. In the meantime, the co-actors who have acted in the play performed outstandingly well, I think so.â
The play Aji Bijon Ghor-e will go on air in any satellite channel in Eid-ul-Fitr, said its director Tuhin.
It may be mentioned that Suborna Mustafa and Shahiduzzaman Selim first performed together in M Hamid produced a play titled Mamuli Byapar. On stage, they first performed together in play titled Kirtonkhola.
In drama serial Gronthikgon Kohe, produced by Riazuddin Badshah under the story written by late Selim Al Deen, they first performed together on the screen.
Meanwhile, under the direction of Shahiduzzaman Selim Suborna acted in drama serials - Sporsher Baire and Rongchhut. They last performed together in a TV play few days ago under the direction of Arif Khan.
However, Suborna Mustafa acted new drama serial is Afsana Mimiâs Shatti Tarar Timir. Suborna will receive lifetime achievement award from Cultural Journalists Forum of Bangladesh (CJFB) in a function to be held on April 8, she said and adding, âNext year I will complete four decades of my acting career in media.âÂ