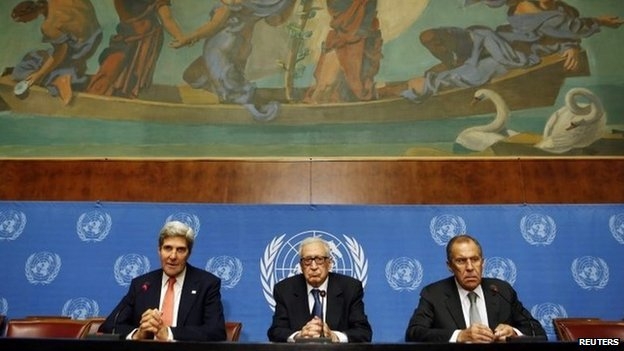 Â 40 foreign ministers are due to meet to discuss Syria as Imogen Foulkes reports : A major conference aimed at finding a political solution to the three-year conflict in Syria that has left 130,000 dead is due to start in Switzerland. The Syrian government and the main opposition are attending the Geneva II summit along with international allies. The key issue, on which neither side appears willing to budge, is the future of President Bashar al-Assad. Differences were also laid bare on the eve of the summit, in a report accusing Syria of mass torture and executions. 'Patience and persistence' The conference will begin in Montreux on Wednesday, and continue in Geneva two days later. Â  Analysis Paul Wood BBC News, Montreux There is the view that getting the Geneva process under way is an achievement in itself. In almost three years of civil war, there has never been a dialogue between the regime and the opposition. But even if such a dialogue begins here in Montreux, the opposition figures doing the talking do not, by and large, speak for the armed groups doing the fighting. There was, briefly, the tantalising prospect - held out by some American officials - that representatives of some key armed groups would attend. But that does not seem to have happened and it is a serious problem. This is the first time the Syrian government and the opposition have met face-to-face since the start of the conflict which, in addition to the dead, has left millions of Syrians displaced. The first day will see speeches from some of the 40 or so foreign ministers who have gathered in Montreux. But as the delegations arrived, the main opposition National Coalition and the Syrian government were quick to set out their agendas on the future of Mr Assad. Syrian Foreign Minister Walid Muallem was quoted by Syria's Sana news agency as saying: "The issues of the president and the regime are red lines for us and for the Syrian people. Nobody can touch the presidency." On his arrival in Switzerland, Badr Jamous, secretary-general of the National Coalition, told Reuters: "We will not accept less than the removal of the criminal Bashar al-Assad and changing the regime and holding the murderers accountable." BBC diplomatic correspondent Bridget Kendall says the UN secretary general will not want his peace talks to collapse into a shouting match, so the UN's main concern will be to get some sort of initial dialogue going on steps that will help beleaguered Syrians. Â  Gathering expectation: (L-R) Lakhdar Brahimi, John Kerry, Ban Ki-moon and Sergei Lavrov in Montreux She says there is talk of possible local truces and humanitarian access to besieged areas. But our correspondent says that even this may be a tall order, given the uncertainty that the Assad government will make real concessions and the lack of sway the opposition delegation has over the many rebel groups fighting in Syria. International delegates to Geneva II have played down hopes of a breakthrough, saying the talks should be seen as the first step in a process. Analysis Lyse Doucet Chief international correspondent Montreux will only mark the ceremonial start. Representatives of dozens of invited nations will sit down with prepared speeches certain to exhort fighters on all sides to end the profound suffering of their people and find a negotiated way out of this deepening crisis. Then, on Friday, when delegates to a luxury watch fair leave their Geneva hotels, Syrian delegations will move there to begin negotiations in a process mediated by UN envoy Lakhdar Brahimi. That is, unless the process collapses from the start in Montreux. A senior US state department official told Agence France-Presse: "I don't think anyone who's dealt with Syrian officials has any false expectations of rapid progress. "Everybody has to understand that this is the beginning of a process. It's not going to be fast. It's very bitter fighting on the ground. And so there's going to be an absolute requirement for patience and for persistence." German Foreign Minister Frank-Walter Steinmeier added: "We must have measured expectations. We will not see peace triumph during these discussions." Mr Muallem did indicate that Damascus was "committed to working for the success of this conference so that it is the first step on the road to a dialogue between Syrians on Syrian soil". A senior Russian official said the first talks were expected to last seven to 10 days, followed by "a short break, and then the talks will resume". Â  Geneva Communique A UN-backed meeting in 2012 issued the document and urged Syria to: On Tuesday, US President Barack Obama telephoned Russian counterpart Vladimir Putin to "discuss the issues of the conference", the Kremlin said. It said the conversation was "businesslike and constructive". Foreign ministers Sergei Lavrov and John Kerry met later on Tuesday in Montreux. The lead-up to the summit has been difficult, with the UN first inviting Iran - Syria's ally - to the talks and then withdrawing the invitation. The UN defended the withdrawal on Tuesday, saying the Iran had orally accepted the Geneva Communique, the plan for a transitional Syrian governing body agreed at a UN-backed meeting in 2012, only to later fail to put the commitment in writing. 'Caesar' On the eve of the summit, a report by three former war crimes prosecutors alleged Syria had systematically tortured and executed about 11,000 detainees since the start of the uprising in March 2011. Â  Leaked pictures 'show evidence of starvation, beatings and strangulation' The report is based on the evidence of a defected military police photographer, referred to only as Caesar, who along with others reportedly smuggled about 55,000 digital images of the dead detainees out of Syria. The US and UN reacted with "horror" to the allegations. A Syrian spokesman said the report had no credibility as it was commissioned by Qatar, which funds rebel groups. Â