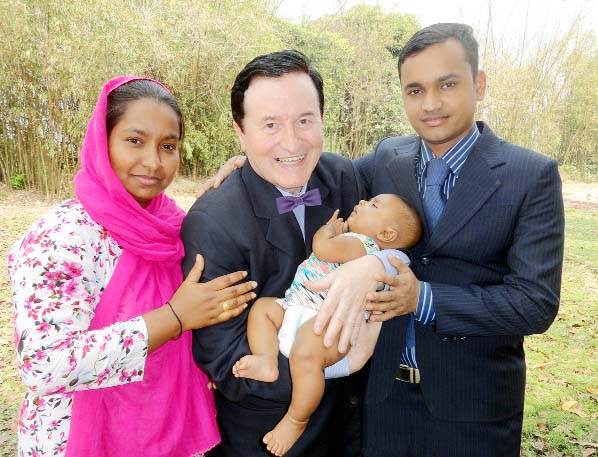 Campus Desk :
To say Sir Frank Peters is a well-known foreign friend of Bangladesh is not enough to introduce him. From his energetic fund-raising days in 1971 at the Jaguar Motor Company in Coventry, England, to help the starving, displaced, war-torn people of Bangladesh; Sir Frank has always held Bangladesh close to his heart, encouraging and helping in its progress at every given opportunity.
Sir Frank has now set a new record that's unequalled by any foreigner or local in the history of Bangladesh. He's just had a third Bangladeshi child named 'Frank Peters' in his honour.
"Naming the child Frank Peters Azad Ali in my honour is a priceless gift to me from Shahida Azad and Azad Hossan who live in Dhokhin Koriea, Fulgazi, Feni" said Sir Frank.
"Having this unique display of love and respect bestowed upon me not once, or twice, but three times - and during my lifetime to be appreciated and enjoyed - I find completely overwhelming. I could not wish for anything better, but discount any rumours that I'm hoping to have my own cricket team one day!" he laughed.
In 2010, Ali Akbar and his wife Poppy from Haydarabad, Gazipur, were the first in Bangladesh to name their son Frank Peters in his honour. In 2013 Mamun Tarek Ali and his wife Tanya from Banasree, Rampura, followed. One wonders if all of the boys will be wearing dick-bow ties one day, as is Sir Frank's distinctive signature.
Among many contributions in his efforts to benefit the nation, Sir Frank produced a unique poster in tribute to Bangabandu that is deemed by many to be the unofficial Proclamation of Bangladesh.
It hangs in the Prime Minister's home, Awami League HQ and in the homes of luminaries and royalty worldwide; but it's his anti corporal punishment campaign that has endeared him most among the young and old, rich and poor here in Bangladesh. For the last five years, he has vigorously and relentlessly campaigned to have corporal punishment banished from Bangladeshi schools, madrassas and homes.
He has accumulated many friends here over the years, from the highest level in society to the lowest in cities, towns and villages. He even has a special relationship with the beggar community of Gulshan, which has given him the pet name Bondhu Hasse (smiling friend)â¦ but that's another story.