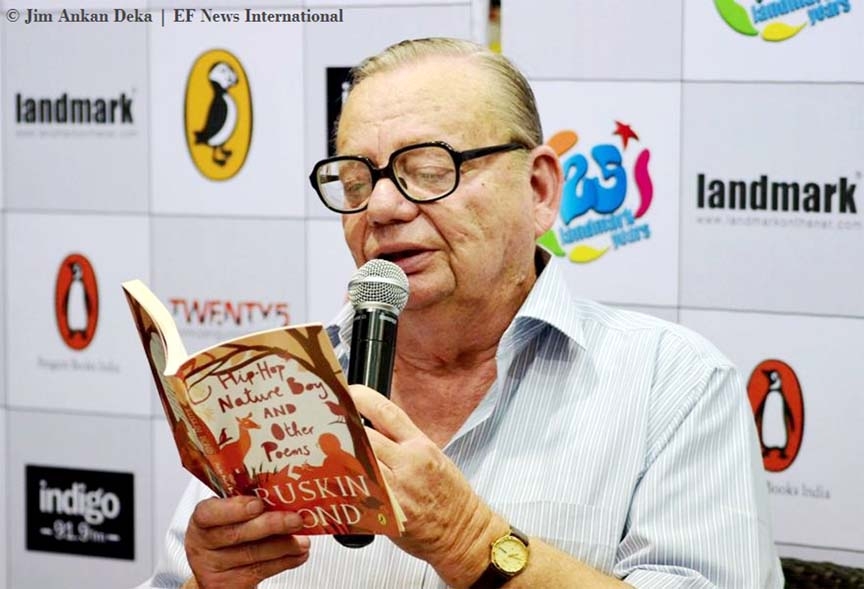 Life Desk :
Children are the recurrent theme in Ruskin Bond's books and the author reveals that his lonely childhood has a lot to do with the theme of his stories.
Ruskin was just four-year-old when his British parents, Edith Clerke and Aubrey Bond separated and he was raised by his grandmother.
"I have always written a lot about the past. I go back into my life. So, in a way the older I get the more I have to write about because you have more people to remember - friends, family, incidents and events.
"Many people ask me why do I write so much about children which I started doing in my 40s. Before that I was writing more or less about adults. I had a pretty lonely childhood and it helps me to understand a child better," Ruskin told PTI.
The author started his literary journey by telling the autobiographical story of an orphaned Anglo-Indian boy Rusty in his first novel, 'The Room on the Roof', followed by its sequel 'Vagrants in the Valley' and 30 other books for children in his more than three-decade-long career.
Ruskin has moved on since but what lives with him is the love for children, whose energies keep him going at 79. He meets them weekly at Mussoorie's famous Cambridge book stall.
"I love watching children grow. You can't be a serious writer if you are not interested in people. I find people interesting so that I can't get bored. Age has not taken a toll on my writing but on my tummy," he joked.
The Padma Bhushan awardee says while not many things have changed, he has become more philosophical as he grows old.
"My writing has slightly changed because now I have become more philosophical. As you get older your views about life change your perception.
"When I was in 20s I was writing love stories. It was my romantic period. And now in my 70s and 80s I find life funny and that's why I write more humorous stories. So, age also in a way has an effect on the kind of stories you are writing," he said.
Some of Ruskin's stories - 'The Blue Umbrella', 'A Flight of Pigeons' (Junoon) and 'Susanna's Seven Husbands' (Saat Khoon Maaf) - have also been made into Bollywood films.
But he does not feel that the art of story telling through books is on the wane with the advent of cinema and television.
"Cinema has been there from a very long time. Story telling goes back to ancient times when stories were told orally by the grandparents to their grandchildren and then printing press came into being. Stories were then told in the written form.
"This written form became a basic foundation of storytelling and film scripts. But I feel that the book still has an advantage over other form of story telling because it is something you can possess," Ruskin added. Ruskin's three short stories -Â  'Sensualist', 'Time Stops at Shamli' and 'Shooting at Mango Top' - have been adapted for Doordarshan's second series of 'Ek Tha Rusty'. The earlier version had seen the author presenting the show.
He is happy with the way the actors do justice to the characters written by him.
"You always have some conflicting views about the characters played onscreen. It depends a lot on the actors and how have they interpreted it. It also depends on how the script is being adapted. But in general most of the characters are being portrayed fairly well. Some of the actors have done really good job in the earlier episodes which I have seen," he said.
- Indian Express