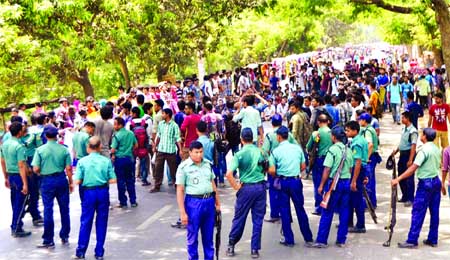 Two more people have been arrested over the murder of Rajshahi University teacher Prof AFM Rezaul Karim Siddiquee.
Police have identified them as Raihan Ali, 32, the imam of a mosque in Siddiquee's village Dargamarhia, and Munsur Rahman, 48, a teacher of Gopalpur Madrasa - both under Bagmara of Rajshahi district.
Rajshahi Metropolitan Police Commissioner Md Shamsuddin said they detained the two during raids in the early hours of Tuesday. Raihan hails from Talgharia village and Munsur from Khajaparha village under Bagmara. Earlier, Hafizur Rahman, a leader of Rajshahi metropolitan ward unit of Islami Chhatra Shibir, was arrested over the murder of the English Department professor. The police commissioner said Raihan had opposed the establishment of a music school in Dargamarhia by Prof Rezaul.
"That's why Raihan has been picked up for interrogation," he said.
Shamsuddin said Munsur is a suspect in the killing. Hafizur, in his second year doing bachelor's in public administration at the university, was nabbed on Saturday night.
Prof Rezaul was hacked to death within 50 metres of his residence in Shalbagan of Rajshahi city on Saturday.