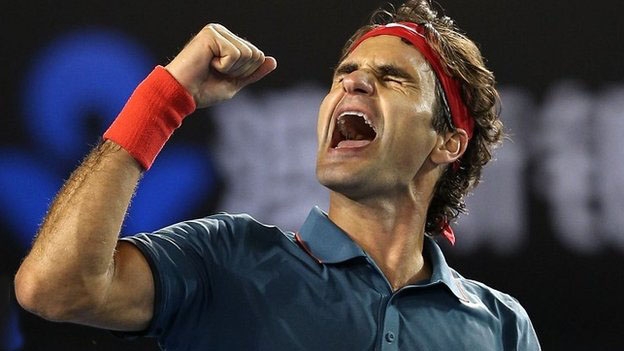 Four-time champion Roger Federer ended Andy Murray's Australian Open hopes with a dramatic win in the quarter-finals on Wednesday.
The Swiss, 32, won 6-3 6-4 6-7 (6-8) 6-3 in three hours and 20 minutes to set up a semi-final against world number one Rafael Nadal.
Federer had been on the verge of wrapping up a faultless three-set performance but failed to serve out the match, and then missed two match points in the tie-break.
Murray was fighting to stay alive in only his second tournament since back surgery, and saved six break points in a marathon 19-minute game early in the fourth set.
But the Scot was constantly playing catch-up and eventually he could no longer hang on, as Federer brought his man into the net at 4-3 and flipped a backhand past the 26-year-old for the decisive break.
"I was proud of the way I fought," said Murray.
"I changed my tactics a little bit, started playing a little bit more aggressive, and that was maybe my undoing a little bit at the end, because I really started going for my shots to get myself back into the match.
"Then when I got broken in that fourth set, I went for three balls. Maybe one or two of them weren't there to be hit."
Federer was relieved to come through to clinch an 11th consecutive Australian Open semi-final place,
"Andy played well and put the pressure on me so I'm happy to get the win," he said.
"I probably miss more break points than other guys but I kept my composure and kept the poker face and tonight it worked."Â