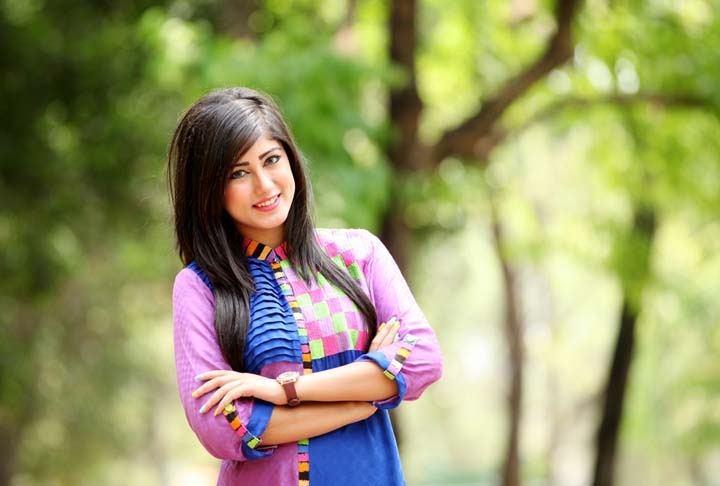 Safa Kabir is one of the promising models or TV actresses of present time. She came into limelight performing in a television commercial of Pran Peanut Bar under the direction of Rahat Rahman.
A dialogue in the TVC Facebooking Parena in Safaâs voice became popular to all. But she started her modelling career on the screen by a TVC of Airtel under the direction of Ashfaq Bipul.
Safa last performed as a model in a TVC ofÂ  Parachute Coconut Hair Oil at the end of last year under the direction of Amitabh Reza.
Later though she didn't appeared on the screen as a model, Safa is giving more time in acting for TV plays now.
Safa came into media by advertisement-maker Adnan Al Rajib. Under his direction Safa first acted in a TV play titled At Eighteen All Time Dour-er Upor.
Later she worked in Atique Zaman directed a play titled Eka Meye.
Safaâs acting was highly appreciated by the viewers in those two plays. Later she worked in several TV plays. In TV play, she last came into limelight acting in Redoan Rony directed a play titled Bhalobasha 101.
While this correspondent asking her how was her feelings to work in media Safa Kabir replied, âI am enjoying a lot. I am getting huge response from the viewers for better works. Itâs very positive for me. Basically I enjoy acting. Therefore, I am also enjoying modeling. I want to establish myself in both the fields. I am requesting all to cooperate me in this regard.â
It may be mentioned that when Safa Kabir was born her father Humayun Kabir was engaged with his business in Russia. For this reason, Safaâs grandfather gave her name Anatoney Kelly. But she is popular by Safa Kabir media. She is studying in second semester of BBA in a private university in Dhaka. Hailed from Barisal Safaâs birthday is August 29, Safa said.
Meanwhile, Safa acted Safayet Mansur Rana directed a drama serial titled Ichchheghuri is being aired on NTV now.