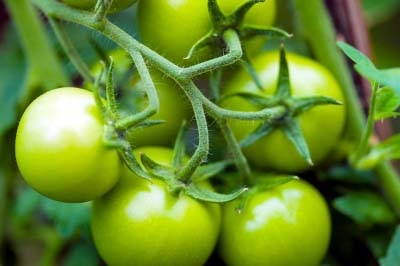 Life Desk :
Tomatidine a compound found in green tomatoes may hold the answer to bigger, stronger muscles, say researchers.
Using a screening method that previously identified a compound in apple peel as a muscle-boosting agent, a team of University of Iowa scientists has now discovered that tomatidine, a compound from green tomatoes, is even more potent for building muscle and protecting against muscle atrophy.
Muscle atrophy, or wasting, is caused by aging and a variety of illnesses and injuries, including cancer, heart failure, and orthopedic injuries, to name a few. It makes people weak and fatigued, impairs physical activity and quality of life, and predisposes people to falls and fractures. The condition affects more than 50 million Americans annually, including 30 million people over age 60, and often forces people into nursing homes or rehabilitation facilities.
"Muscle atrophy causes many problems for people, their families, and the health care system in general," Christopher Adams, M.D., Ph.D., UI associate professor of internal medicine and molecular physiology and biophysics, said.
"However, we lack an effective way to prevent or treat it. Exercise certainly helps, but it's not enough and not very possible for many people who are ill or injured," he said.
In a new study, Adams searched for a small molecule compound that might be used to treat muscle atrophy.
He zeroed in on tomatidine using a systems biology tool called the Connectivity Map, which was developed at the Broad Institute of MIT and Harvard University.
Adams discovered that tomatidine generates changes in gene expression that are essentially opposite to the changes that occur in muscle cells when people are affected by muscle atrophy.
After identifying tomatidine, Adams and his team tested its effects on skeletal muscle. They first discovered that tomatidine stimulates growth of cultured muscle cells from humans.
Their next step was to add tomatidine to the diet of mice. They found that healthy mice supplemented with tomatidine grew bigger muscles, became stronger and could exercise longer.
And, most importantly, they found that tomatidine prevented and treated muscle atrophy.The findings are published online in the Journal of Biological Chemistry.