Coastal areas of Bangladesh at risk from rise in sea-level 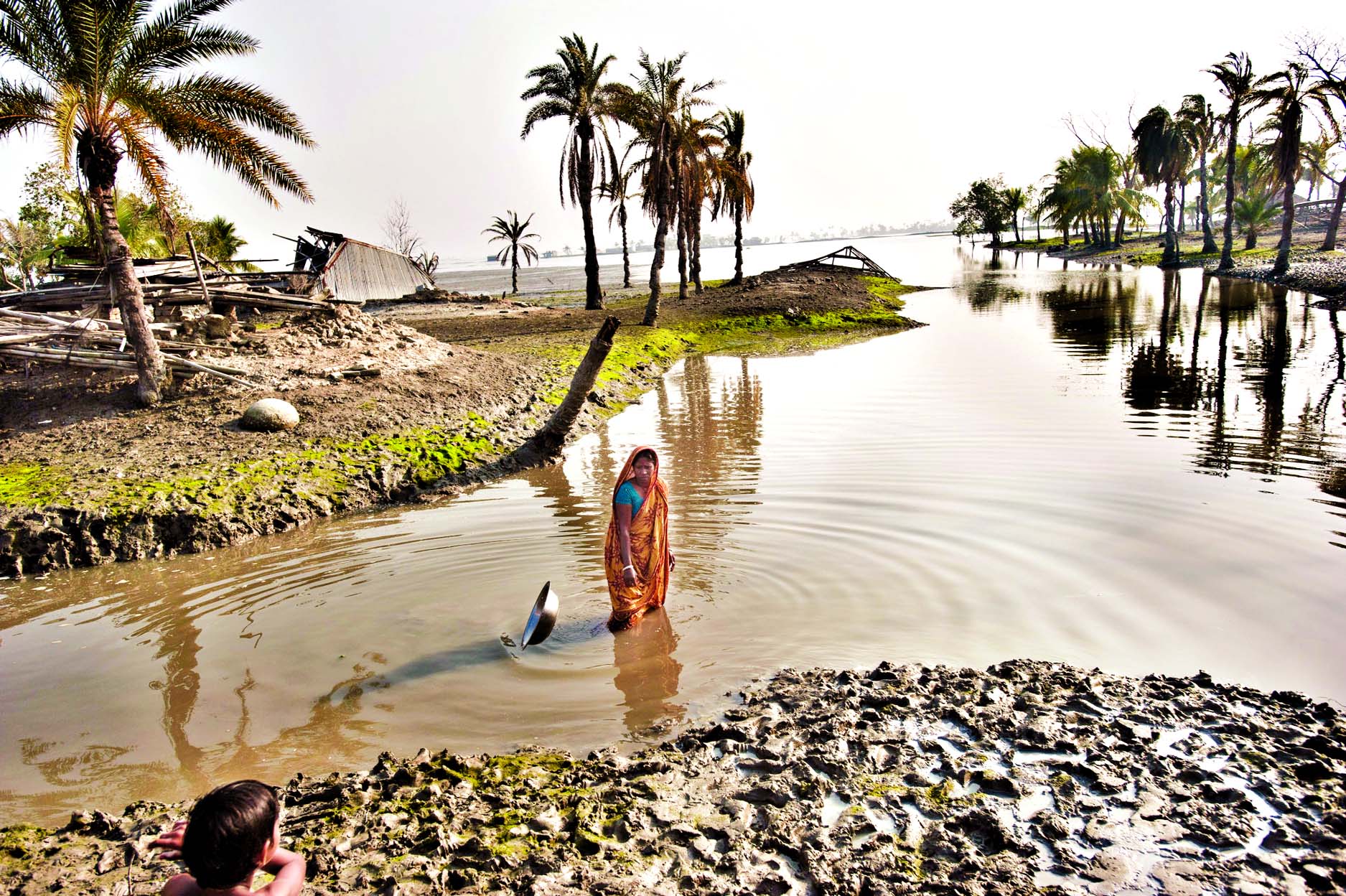 Bahauddin Foizee :
Bangladesh is one of the most vulnerable countries in the world due to climate change. Besides its major problems of poverty and illiteracy, Bangladeshâs vulnerability to climate change is very alarming. The overall economic development of the country has been troubled to a considerable extent by the adverse affects of climate change.
Among the major impacts of the climate change - particularly of the global warming - the increasing rise in sea-levels every year has been the most alarming one so far, with the possibility of submerging 6 to 8 per cent of âflood-proneâ Bangladesh under water by 2030 (a prediction made in 2007 by the UK Department for International Development). The major cause behind the rise in sea-level is the rapid melting of ice of different regions, mostly of the south and north poles.
Melting of ice, without any doubt, causes the sea-levels to rise. The effects of the continuation of the rise in sea-levels are deep. It would submerge under water many areas around the globe, especially the coastal ones; and perhaps it will not take decades for the coastlines to change.
The rise in sea-levels has been causing more floods, especially during storms. Higher sea-levels have increased the size of the flow of water that the super-storms generally bring into inland from the ocean. Some short term impacts of rise in sea-level (especially due to polar ice melting) are regularly experienced these days by many victims around the globe.
The Tsunami is an ideal example of what sort of disaster the rise in sea-level, caused by melting of polar ice, could lead us up to.
North Pole or Arctic region, which is one of the two heaviest ice-covered regions in the globe, is warming faster than other areas across the globe. In this region, temperature has increased over the decades by an alarming rate compared to the rest of the globe, and it seems that temperature in this region will continue to increase if measures are not taken to reduce this increasing trend. The warming atmosphere, along with a changed weather-pattern, is causing Arctic ice to melt at such alarming rapidity that a greater portion of Arctic ice will be gone in next two decades, and an ice-free Arctic summer could be experienced by next four decades, as claimed by the experts in this field. The ice of the region is already reduced by as much as 50 per cent compared to the 1950s. The impacts of declining ice-cover in the Arctic are far-reaching, from species endangerment to the weakening of global ocean circulation, to massive ârise in sea-levels.â
The other of the two heaviest ice-covered regions in the globe is the South Pole or Antarctic region. Thousands of tourists and researchers visit the region, especially the Antarctic Peninsula, every year. More scientists, more tourists, more research stations, more countries hunting for minerals and other resources, and greater access to the region in general are making the region increasingly warmer.
Moreover, an increase in visitors means more boats/ships, other external materials brought by them, more carbon dioxide and so on.Â  Therefore, the disturbances to the regionâs fragile environment are ever increasing with these pollutions. The carbon emissions in the far away human inhabited areas are also contributing to the increasing warming of the Antarctic region. The warming, in turn, is causing the sea level to rise in an unprecedented rapidity.
Melting of polar ice is scary for many reasons, and the scariest is the rise in sea-level, as mentioned earlier. In long run, the coastline and coastal cities will be lost. But in the short term, it will cause more damage through floods and powerful storms that might bring water into inland with them, causing devastation like that of the Tsunami.
With flat and low-lying landscape, the whole coastal area of Bangladesh is highly vulnerable to such floods and storms. Almost one-fourth of the total population of Bangladesh live in the coastal areas, where majority of the population are affected, directly or indirectly, by coastal floods or tidal flows, salinity, tropical cyclones, erosion of river-bank etc. With the rise of sea-level âeven by a metre,â Bangladesh could lose a substantial percentage of its total landmass under the sea water, turning millions of inhabitants living in the coastal areas of Bangladesh into climate refugees.
Moreover, the freshwater sources in the coastal areas of Bangladesh face deep intrusion of saline water from the Bay of Bengal during the dry season. The melting of polar ice in its gradual process will only deteriorate the existing situation to a great extent.
German scholars from Potsdam Institute for Climate Impact Research warned that if incentives of the global warming, especially the carbon emissions in the atmosphere, are not reduced immediately worldwide, a series of unstoppable events will be triggered, causing dramatic rise in sea-levels and the total annihilation of coastal cities inhabited by millions of people. This speculation of course does not exclude coastal areas of Bangladesh. While this is a comparatively long term impact of global warming, or of melting of polar ice to be precise, Bangladesh is likely to experience more 'immediate' adverse impacts of global warming, as mentioned earlier. Agriculture, industry, school, hospitals, roads, bridges, livelihoods, marine resources, forestry, biodiversity, human health and other utility services will suffer severely.
All in all, earth's temperatures are rising, the ocean water is warming, polar ice is melting, and sea levels are going up. It is high time for Bangladesh to start working on real solutions along with other most affected countries. Bangladesh must start addressing these above mentioned concerns with utmost urgency in the global platforms. n

(Bahauddin Foizee is Lecturer at DCLE (Centre of University of London), legal associate in a law firm, and regularly writes on global affairs)