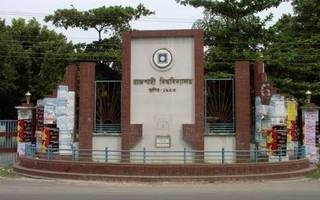 Four persons including a policeman were injured when a bomb exploded in Rajshahi University on Thursday. The bomb went off as security personnel were searching a bag of a young man who claimed he wanted to sit for the admission tests at the University. RU Proctor Tariqul Hasan Milon said that the explosion happened around 10 am at the Binodpur Entrance to the campus. Two girls from Gaibandha, Reshmi' and Juthi, policeman Mojibul and the university's security staff Nazrul Islam were hurt in the explosion.Â  "Police and security personnel were searching those who had come to take the admission tests while they were entering the university. The bomb exploded as soon as a bag belonging to a young man was opened," said the Proctor. The young man immediately fled after the explosion.Â Â

The injured have been taken to the Rajshahi Medical College Hospital, the Proctor said.
Police fired a few blank rounds to bring the situation under control as tension spread in the campus following the incident.
"The explosion was to create instability in the University. But, we are holding the admission tests as per the schedule," said the Proctor.