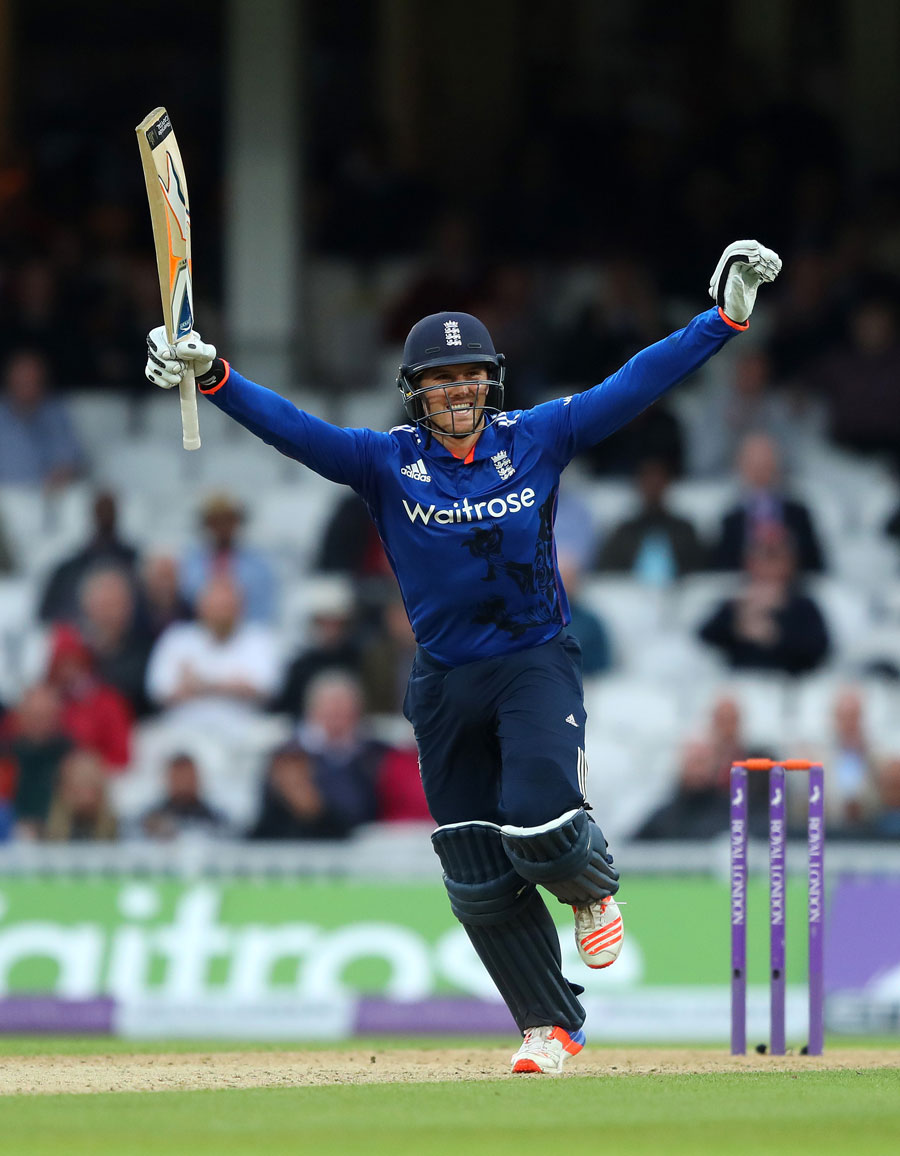 Jason Roy brought up his hundred from 74 balls during the 4th ODI between England and Sri Lanka at the Oval on Thursday.

Jason Roy was left with a bitter-sweet taste after his spectacular match-winning 162 clinched a one-day series win over Sri Lanka on Thursday. The Surrey star would have loved to have set a new individual highest ODI score by an England batsman on his home ground The Oval. But he fell five agonising runs short of Robin Smith's 23-year record 167, which he made against Australia at Edgbaston. The 25-year-old, whose man of the match display helped England to a six-wicket win and an unassailable 2-0 lead with just one game left in Cardiff on Saturday, was annoyed for getting out so close to the end of the game. But he admitted he had little idea that he was close to overtaking Smith while at least still setting a new highest ODI score by an England batsman at The Oval. "I didn't know about the record and I am still proud of being second on the list," he said. "It's a shame and a little disappointing I could not be there at the finish of the match but to play an innings like that and help the side win a series is still very special. "It was even better to do it on my home ground and in front of a packed Oval crowd cheering me and the guys on. "I've put in a lot of hard work and I'm now seeing the rewards of that hard graft. I've had low points this season but this is certainly a very high one. "I expect someone will be able to beat Robin Smith's score one day. I am sure they will. I will certainly push for it if I get the chance." Roy thrilled the England fans with 13 fours and three sixes before being bowled by Nuwan Pradeep. It was his second century in three ODIs. England captain Eoin Morgan Morgan saw his side reach their revised target of 308 to beat Sri Lanka with 11 ball remaining in a rain-hit game. And he claimed: "We have lots of match winners in our team which is growing and improving all the time. I have no doubt that one of them can achieve the goal of surpassing Smith. "Jason was magnificent. He's in fantastic form now and he is cashing in. It feels good to win this series but we want to finish it off in Cardiff on Saturday with another great performance and win if we can." Joe Root, out of sorts recently having struggled with the bat, returned to form with 65 but he was less happy with his bowling attack. Morgan said: "We bowled too many loose deliveries and balls which asked to be hit. It's a very good wicket here so you have to bowl tight and accurately. But I always knew we could chase down the target." Sri Lanka had amassed 305-5 off their alloted 42 overs, reduced from 50 by the persistent Oval drizzle with Kusal Mendis top scoring with 77. Sri Lanka captain Angelo Matthews admitted: "We allowed England to get off to a flying start and couldn't claw it back by taking wickets. We are disappointed to lose the series but we want to do our best to end on a high in Cardiff if we can." England will give Alex Hales a fitness test today to decide if the opener can play in the final clash. Hales sustained a minor back strain while fielding at The Oval and had to go off for treatment. He was unable to bat.