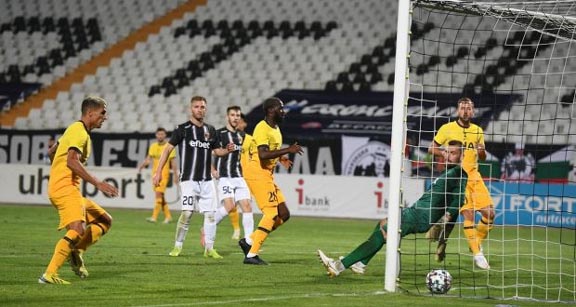 BBC Online :
Tottenham boss Jose Mourinho says that "in this moment" he "believes" in record signing Tanguy Ndombele after he bundled in a late winner against nine-man Lokomotiv Plovdiv in the Europa League.
Spurs survived a scare to reach the third qualifying round but were forced to come from behind in Bulgaria.
Georgi Minchev headed Plovdiv ahead on 72 minutes before the home side had two players sent off with 10 minutes left.
Harry Kane levelled from the penalty spot and substitute Ndombele sent Spurs through with the winner in the 85th minute.
The 22-year-old, signed for Â£54m from Lyon in August 2019, has only started 17 games in all competitions for Tottenham after a 2019/20 season hampered by injuries and criticism from his manager.
"Tanguy is in a process of evolution," said Mourinho, who in March called for the France midfielder to "give more" in games.
"Last season he wasn't. Last season he was stuck in a situation where I couldn't see evolution," Mourinho added. "In this moment he's training very, very well. He's recovering from his injury, he's recovering physically and he gave us what we needed in this last 30 minutes.
"In this moment, I believe in Tanguy. I never doubted his quality. Never. I doubted in some moments his motivation and commitment and professional attitude.
"We made this decision together to not start the game because he also feels that he needs a bit more but in this moment I think that Tanguy can do well for us."
Spurs face another long trip next Thursday to face Macedonian side Shkendija in the third qualifying round in a busy week for Mourinho's team.
They have a Premier League game against Southampton on Sunday, an EFL Cup match against Leyton Orient on Tuesday and then the journey to North Macedonia two days later.
If they win both those cup games, they face a similar schedule the following week too.
All European qualifiers are being played over one leg this season because the campaign started later as a result of the coronavirus pandemic.
Mourinho said that had forced him into playing a stronger side than he would have done if there had been a second leg in London.
He made four changes from Sunday's 1-0 Premier League defeat by Everton, but all four were first-team regulars.
The visitors dominated possession without looking impressive and Steven Bergwijn hit the bar before Son Heung-min missed from close range.
And Minchev's header from Dimitar Iliev's cross had them on the brink of a European exit.
The turning point was undoubtedly Dinis Almeida's handball on the line which earned him a straight red card, with Birsent Karagaren also dismissed in the aftermath for dissent.
Kane placed his penalty into the top corner and they dominated for the rest of the game, with substitute Ndombele converting Moura's cross for the winner.