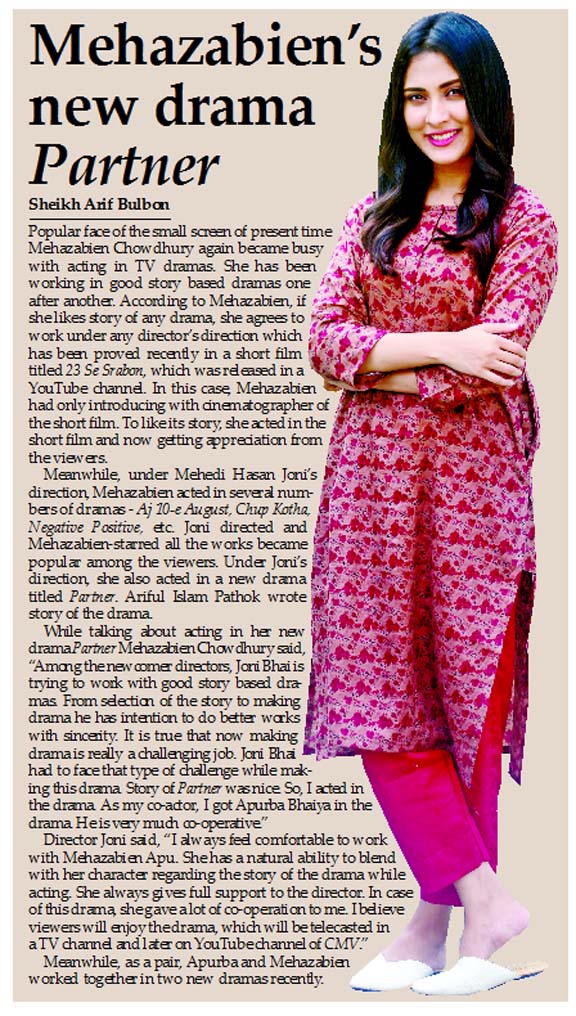 Sheikh Arif Bulbon :
Popular face of the small screen of present time Mehazabien Chowdhury again became busy with acting in TV dramas. She has been working in good story based dramas one after another. According to Mehazabien, if she likes story of any drama, she agrees to work under any directorâs direction which has been proved recently in a short film titled 23 Se Srabon, which was released in a YouTube channel. In this case, Mehazabien had only introducing with cinematographer of the short film. To like its story, she acted in the short film and now getting appreciation from the viewers.
Meanwhile, under Mehedi Hasan Joniâs direction, Mehazabien acted in several numbers of dramas - Aj 10-e August, Chup Kotha, Negative Positive, etc. Joni directed and Mehazabien-starred all the works became popular among the viewers. Under Joniâs direction, she also acted in a new drama titled Partner. Ariful Islam Pathok wrote story of the drama.
While talking about acting in her new drama Partner Mehazabien Chowdhury said, âAmong the newcomer directors, Joni Bhai is trying to work with good story based dramas. From selection of the story to making drama he has intention to do better works with sincerity. It is true that now making drama is really a challenging job. Joni Bhai had to face that type of challenge while making this drama. Story of Partner was nice. So, I acted in the drama. As my co-actor, I got Apurba Bhaiya in the drama. He is very much co-operative.â
Director Joni said, âI always feel comfortable to work with Mehazabien Apu. She has a natural ability to blend with her character regarding the story of the drama while acting. She always gives full support to the director. In case of this drama, she gave a lot of co-operation to me. I believe viewers will enjoy the drama, which will be telecasted in a TV channel and later on YouTube channel of CMV.â
Meanwhile, as a pair, Apurba and Mehazabien worked together in two new dramas recently.