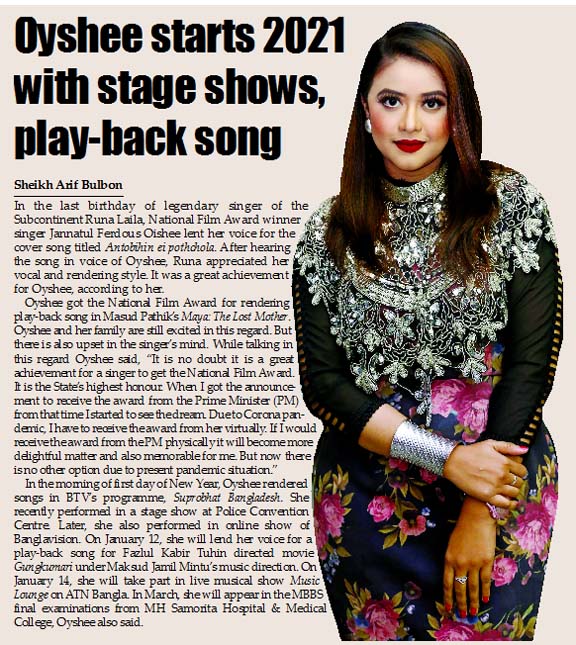 Sheikh Arif Bulbon :
In the last birthday of legendary singer of the Subcontinent Runa Laila, National Film Award winner singer Jannatul Ferdous Oishee lent her voice for the cover song titled Antobihin ei pothchola. After hearing the song in voice of Oyshee, Runa appreciated her vocal and rendering style. It was a great achievement for Oyshee, according to her.
Oyshee got the National Film Award for rendering play-back song in Masud Pathikâs Maya: The Lost Mother. Oyshee and her family are still excited in this regard. But there is also upset in the singerâs mind. While talking in this regard Oyshee said, âIt is no doubt it is a great achievement for a singer to get the National Film Award. It is the Stateâs highest honour. When I got the announcement to receive the award from the Prime Minister (PM) from that time I started to see the dream. Due to Corona pandemic, I have to receive the award from her virtually. If I would receive the award from the PM physically it will become more delightful matter and also memorable for me. But now there is no other option due to present pandemic situation.â
In the morning of first day of New Year, Oyshee rendered songs in BTVâs programme, Suprobhat Bangladesh. She recently performed in a stage show at Police Convention Centre. Later, she also performed in online show of Banglavision. Today she will lend her voice for a play-back song for Fazlul Kabir Tuhin directed movie Gungkumari under Maksud Jamil Mintuâs music direction. On January 14, she will also take part in the live musical show Music Lounge on ATN Bangla. In March, she will appear in the MBBS final examinations from MH Samorita Hospital & Medical College, Oyshee also said.